While the Gelatinous Cube has its merits, I chose to go with an Aberrant rather than an ooze. While the Mind Flayer is certainly one of my most favorite aberrations, there is one that I like just slightly more: 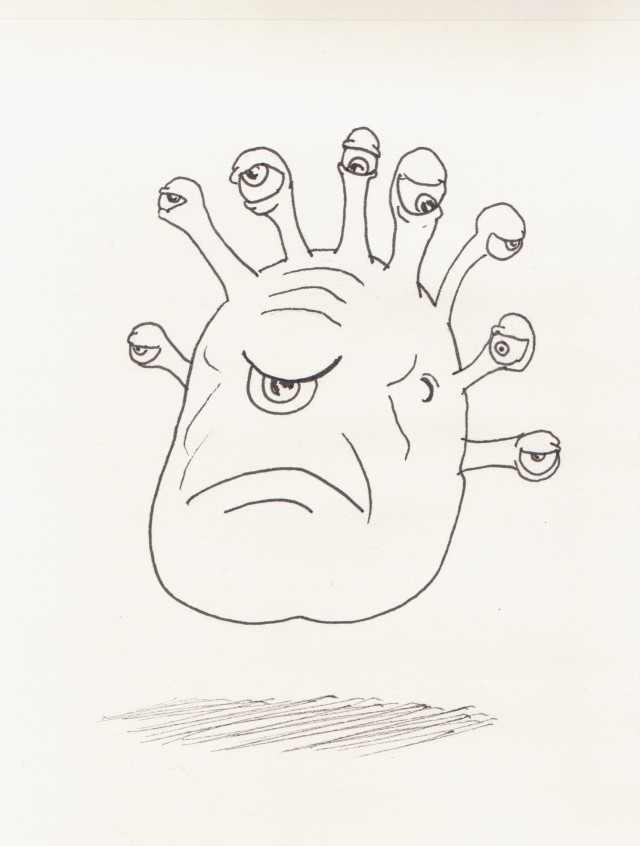 Beholders are nasty and cruel creatures, and their eyes shoot all sorts of magical rays. When that big floating mass appears, the players know that it is business time, as a Beholder can easily turn a simple fight into a terrifying life-or-death struggle.

The one time I was able to have my players fight a beholder was pretty awesome. I don’t remember much of the fight, but I do remember that it was tons of fun and that the warlock of our group looted a Beholder Lens off of the beholder’s body. The beholder was using the lens to split and empower its ray attacks. I told the player that he could use it maybe once, and he did – when he managed to slay Asmodeus on one hit.

When it comes to the undead, there are few monsters that I like more than the lich.

The lich is an undead wizard that typically specializes in necromancy. Liches are notoriously difficult to destroy, as they have a phylactery that must also be tracked down and destroyed. The process of finding that phylactery could make a quest all unto itself since liches tend to be a bit paranoid that people are going to destroy their soul-holding containers that guarantee the lich eternal life.

A lich’s desire to not die and subvert the natural order is an understandable and very human one. Their obsession often leads to madness, and makes them prime candidates for the position of big, bad boss guy.

I don’t always claim membership to the Cult of the New, but when it comes to favorites, I’m often in its ranks. Perhaps it makes me fickle, but it’s just kind of how my mind works sometimes. Such is the case with my favorite NPC.

Josef was a clown in the Hobomancer game I was running. He was abusive and cocky, and not above hurting his partner Claudio physically if it meant that someone thought it was funny. However, his act was the only thing really keeping the circus that he was travelling with on its feet.

The troubled relationship of the two clowns was a fine centerpiece for  role play encounter. The players tried to understand how Claudio and Josef’s relationship worked, and eventually discovered that Claudio was a masochist who was fixated on the abuse he was receiving from Josef – the negative stroke he was receiving was really the only stroke his ego had going for it.

Seeing the players deal with this sensitive and volatile pair was a pleasure, and is one of the things that brought me a ton of joy in my current game.

So, I’m of two minds here, mostly because these are really two distinct concepts.

My favorite traps would have to be the kind that empower undead and weaken the living. I have a particular love for the undead, and playing to their strengths is always a good thing to do. Something with Enervation should do the trick, though several spells heal undead while hurting the living.

Alternately, everyone love 5 foot square pit trap with a gelatinous cube that falls from overhead, filling the space and enveloping the trapped individual 🙂

My favorite kind of puzzle is an integrated dungeon. More or less, the players can solve certain mechanical puzzles, and which path they take through the dungeon depends on what they solve and how they solve it. Basically, they need to solve puzzles to move on, but only a specific sequence will take them through all the rooms of the dungeon.

I did this with a party by having them enter a temple of Tiamat. The temple was designed to house several dragons comfortably and to protect both the dragons and their treasure. The PCs left that temple with enough gold to afford diamond shoes. Not diamond encrusted shoes – shoes made from one enormous diamond.

This is a pretty simple answer for me: wilderness.

When it comes to interesting encounters, nothing beats nature. The wide variety of ecosystems alone gives the DM a wealth of possibilities, and because the PCs are out in the open, they have a greater sense of freedom. Harsh climates provide their own challenges that can overcome a low-level or ill-prepared party. Storms and weather conditions can give a wilderness encounter extra flair, or can just serve as a nice excuse for the characters to have some down time.

Deserts are a particular favorite of mine. I’m not sure if it is just that everything in a desert wants to kill the PCs or what, but the inhospitable environment of a desert makes for some great adventures.

Some of What I’ve Been Doing

So, as mentioned, I’ve been working on a few projects. While some are writing related, others are more hobby-like. Case-in-point: I’ve been painting the figures for a boardgame called Shadows of Brimstone. Shadows is a miniatures-based, co-op boardgame with a heavy RPG feel. I’ve managed to get a few plays in so far, and I’ve enjoyed it. That said, the process of painting everything is on-going, and will likely go-on all summer.

Here’s some of what I’ve done:

First, two of the heroes:

My favorite is the Preacher. I’ve tried a couple of different versions of the Preacher class, and each version works better or worse depending on the number of players.

Next-up is the class that my wife had sampled: the Bandito. The Bandido that she played was a reckless, carefree sort of character that loved using dynamite to solve his problems.

Next, a monster: The Tentacle! There were 12 tentacles to paint altogether, so I managed to plow through them by working like an assembly line. The tentacles are nasty monsters that can really wreck your characters if you aren’t careful. What’s worse, they really can hamper your movement and add a bit of challenge to any room they appear in.

Then there are the Night Terrors. I haven’t fought one yet, but they look rough and tough. They also look like evil Cookie Monsters.

Lastly, there’s the big guy: The Harbinger. A friend and I took this guy on during our game on International Tabletop Day and were hammered like yesterday’s nails. The Harbinger is tough, and comes with a suite of abilities that make it super-lethal.

While I’m still a mini-painting novice, I’m pretty happy with how these guys came out. While some of the models lack the level of detail I was expecting, I’m still having fun paining them. I’m looking forward to having a fully-painted set, and quiver in my boots when I just think about to 106 other minis that should be delivered next winter.

I hope you enjoyed taking a peek at my minis. I’ll post more as time goes by, and if there’s any interest.

I’ve run several games over the years, and each one stands out in my memory for different reasons, but I think that my favorite one was a campaign of Little Fears I called The Monster Hunters of Peach Street. I liked it for several reasons – the group was small but very engaged, the locale was my neighborhood, and the plot was very enjoyable. It gave me my usual chance to craft gross monsters, and because it was in the Little Fears world, the players were able to use their imaginations to overcome some pretty nasty stuff.

While the PCs talking to a gnome that was a secret communicator to an underground monster hunting conclave was fun, and seeing them cope with a living blob/kielbasa monster was great, it was the climax of the adventure that I enjoyed the most. You see, all through the campaign, they were dealing with supernatural threats, and the end boss was being built up as the biggest and baddest of them all.

The last session saw them going to a sketchy apartment complex “where the monsters come from”. Each floor involved specific fears, and as they climbed higher, everything became more and more deranged. Of course, they were ready to meet some slavering slime or gnarly ghoul.

However, instead of finding a pus dripping nastyman, they found an adult. He was a grown-up that never lost his innocence, and as such, still saw the nightmare creatures that only children in the world of Little Fears can see. Through the story, his plan was to cause the world of nightmare to converge with the real world so that he could show everyone what reality was really like. He was mentally unstable, with a childlike demeanor, and he had a gun.

The moment that the PCs were threatened with an adult with a gun was a priceless one. The players were very concerned for their characters’ well-being, and the shift in flavor was just the twist that could end the adventure, and campaign, on a high note.